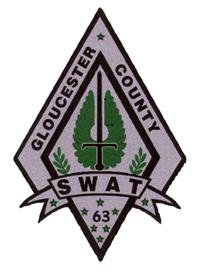 The team consists of four branches:

Critical incidents present special problems to police officers, citizens, and victims. Each critical incident situation is different, but a basic plan will assist responding law enforcement officers. This directive is intended to memorialize and state the basic rules and protocols concerning management and command of "critical incidents" occurring within the County of Gloucester.

Critical Incidents Subject to Activation of the SWAT Team