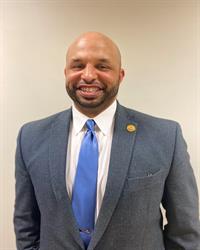 Commissioner Jim Jefferson is serving his second term on the Gloucester County Board of Commissioners.

As a Commissioner, Jim oversees the Department of Health and Human Services that includes:

Jim lives in Woodbury with his wife Anne and his children Isaiah, Eva, and Victoria.

With over a decade of experience working within government, Jim has previously served as a Constituent Relations Specialist and a Special Assistant to the New Jersey Speaker of the General Assembly. Working for then Speaker Joseph J. Roberts Jr, he assisted residents and served as a liaison for the Speaker to the Governor's Office, Executive Branch Departments and Agencies and State, Federal and local officials.

In January of 2010, Jim was appointed to the NJ State Parole Board by Governor Jon Corzine. He serves an Associate Board Member and is assigned to the Juvenile Panel. Along with his partner, they handle all juvenile parole matters for juveniles sentenced to the custody of the Juvenile Justice Commission. In addition, he helps establish State Parole Board policies within the Community Program Unit as chair of the Community Programs Committee. In 2016, he was reappointed to the Parole Board by Governor Chris Christie.

He is also a member of the Saints Prison Ministry and has visited prisons in many states to help combine faith, athletics and personal responsibility for the rehabilitation of incarcerated individuals. The Saints Prison Ministry is America's largest athletic prison ministry which is based in Moorestown, New Jersey. Having traveled to over 200 prisons in his 13 years with the Saints, the ministry has brought together his passion for his faith, sports, and helping people.