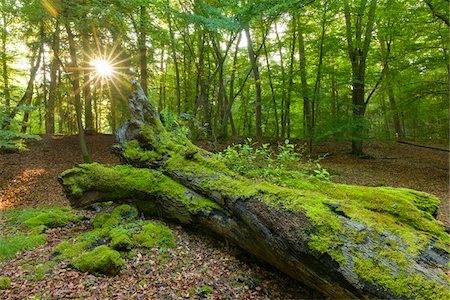 Logs are amazing things. Thousands of kinds of insects, worms, fungi, moss and other things live
on top of, inside of, and under logs! This log is covered in different types of mosses and other plants.
It’s so big that it would be hard to lift, but no doubt there are many creatures living under it.


Logs are home to many many different creatures.  There are more kinds of animals that live in logs than in living trees!  That seems really surprising but it’s true.  Many kinds of beetles and their grubs (worm-like baby beetles) live inside of logs, including the grubs of lightning bugs (also known as fireflies).  You can also find other beetles, millipedes, pillbugs, and centipedes.  Some of these creatures are dull brown or black, but some of them can have very pretty colors too.  Check out the pictures of a beautiful red-legged buprestis (a type of jewel beetle) and a blue millipede on the next page! 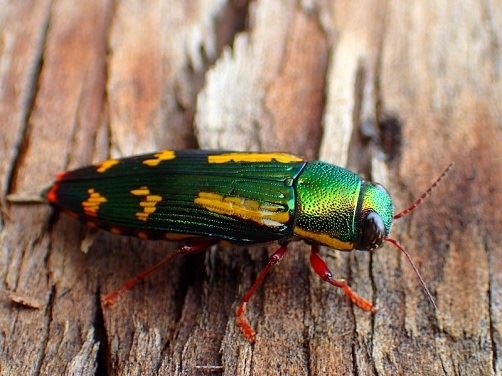 This red-legged buprestis only lives in logs in the forest in places like South Jersey. We don’t know
very much about the lives of these beetles. Much about them is still a mystery! 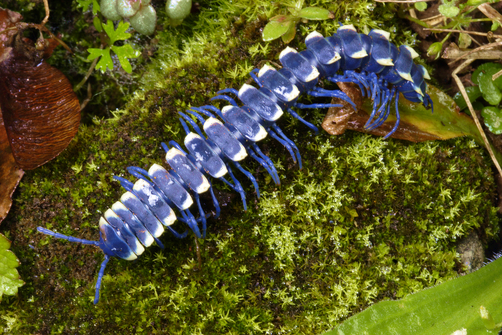 This is a type of millipede. Some of them have beautiful colors. They usually live in damp logs or
near them and they eat decaying moss and leaves.

Some species of amphibians and reptiles live under logs, including salamanders and snakes.  At Scotland Run Park we have about a dozen kinds of snakes and two of them are almost always found in logs – the ring-necked snake and the worm snake.  Ring-necked snakes are a beautiful yellow color on their belly, and a silvery-grey color on their backs.  They also have a yellow ring around their neck (and that’s where they get their name).  They eat worms and slugs and live most of their lives deep inside rotting logs, but sometimes they leave their logs and wander through the forest and across paths or sit on rocks.  This is when we usually see them. 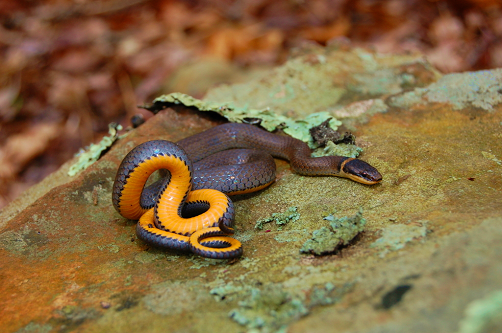 This is the beautiful ring-necked snake.  Sometimes Dr. Duran finds them on nature walks at Scotland Run Park!

Logs are important homes for wildlife, so we should be careful not to disturb them too much.  If you roll a log over to see what’s underneath, make sure to roll it back to exactly the way it was before.  And it’s not just animals that like logs.  Plants and fungi (mushrooms and relatives) live in and on them too. Fungi REALLY like logs and a large number of them will only live in logs.  They digest (eat) the rotting wood and help break it down into dirt.  Next time you’re looking at a log, look for mushrooms! 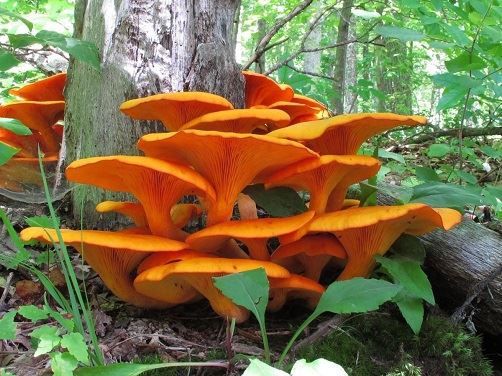 These are chanterelle mushrooms.  Sometimes they live at the bottom of a dead or dying tree and sometimes they’re
on logs, or on the ground near logs.  Check out the beautiful orange color! 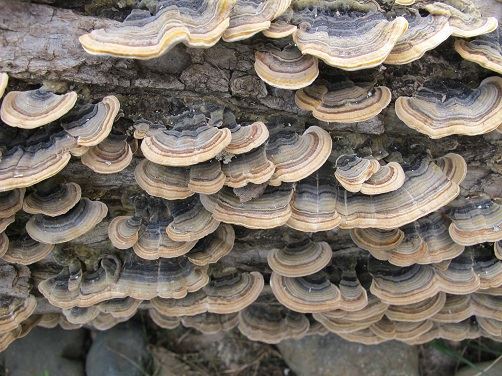 This type of mushroom is called a bracket fungus.  They’re always on deadwood, never on the ground.  Sometimes they live on logs and
sometimes on standing dead trees.  Some people call these “turkey tails”.  Can you see what they are called that?

If you want to learn more about the things that live in logs, check out this link below

Let’s also try a craft where you can learn to make some creatures that live in or on logs (like millipedes and snails). You can eat these too!
Edible Craft: Bugs on a Log
Use the knowledge of what bugs can be found in and under logs! Get creative with your favorite fruits and vegetables to make this healthy snack! 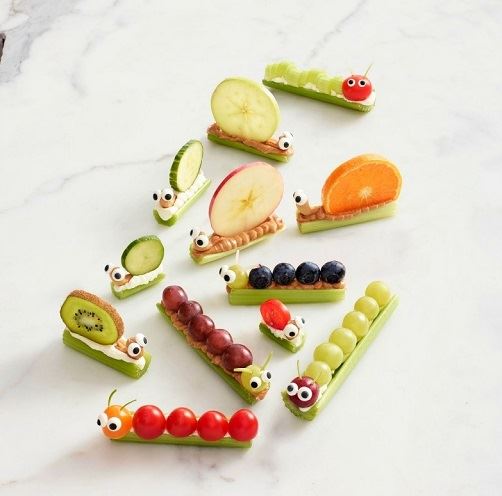